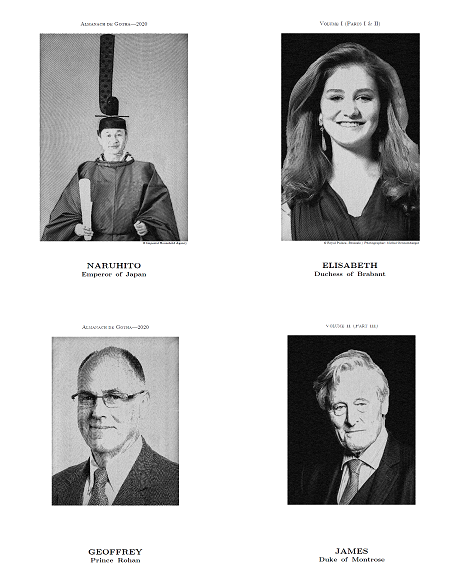 The 2020 203rd edition follows the successful format of previous editions with families listed by rank in their corresponding parts. Births, marriages and deaths of all members of the Gotha have been updated.

The Times Literary Supplement praised the Almanach de Gotha for "its punctilious itemization of titles, lineage and heraldry [aiming] for scholarship rather than sensation". Sir Stephen Runciman wrote in the Spectator "In this present age, which we are often told sees the twilight of royalty, it is comforting to be able to welcome the reappearance of the most distinguished of genealogical almanacs."

The 2020 203rd edition follows the successful format of previous editions with families listed by rank in their corresponding parts. Births, marriages and deaths of all members of the Gotha have been updated and it remains the only publication to list all the members of all the imperial, royal, princely and ducal houses and the courts of the Holy Roman Empire. Even family disputes are handled by the careful noting of competing claims. This new edition also sees a full list of the households of the courts of Europe, diplomatic listings updated to include geopolitical and diplomatic changes and significant updates in the chapter devoted to the Holy See, including the comprehensive listings of new appointments made by the Pontiff to the College of Cardinals and elsewhere including that of Fernando Cardinal Filoni as Grand Master of the Equestrian Order of the Holy Sepulchre of Jerusalem. In addition, this edition includes the births of Archduke Maximilian of Austria Este, Prince of Belgium, Prince Welf August of Hanover, Enrique de Borbón, Duke of Touraine and Hereditary Prince Franz Salvator of Isenburg, the marriages of the Prince and Princess Napoléon and the Prince and Princess of Castell-Rüdenhausen and the deaths of Henri VII, Count of Paris and titular King of France, Jean, Grand Duke of Luxembourg, Ferdinand, Prince zu Hohenlohe-Bartenstein-Bartenstein, Gabrielle, Dowager Duchess of Croÿ and Paula, Dowager Princess of Fürstenberg.

This is the official and authorised publication. The most comprehensive listing of its kind, with an impeccable pedigree, the book remains an essential reference for genealogists, libraries and scholars. There is and never has been a comparable source, a book once described as "the second most important ever published".

Save this product for later
Display prices in: GBP